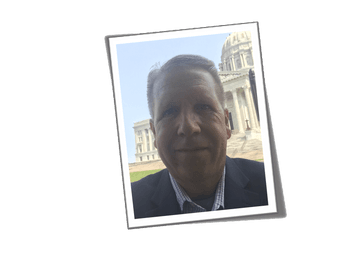 I grew up in a strong Christian family in Minnesota; there was no drinking, no drugs, no cursing, etc. If church was in session, we were probably there. When I was a teenager, I started working in restaurants and
hanging out with an older crowd of people. At age 15, I tried my first beer and wanted to vomit; it was warm and terrible. But soon, I started drinking at parties and found alcohol to be a perfect escape. It made me feel comfortable. Although I didn’t drink often, when I did it was always binge drinking. I did well in school, graduating at the top of my high school class and college. Then, just like the Prodigal Son, I moved to a land far, far away to Washington, D.C. where I went to law school and started to engage in immoral living. I justified my drinking as “being essential to my work.” For many years, I worked as a “functional alcoholic,” if any such thing exists. Eventually though, I drank my way out of employment and I received a large  severance. I spent the next year doing nothing but drinking and partying, drinking up all of my resources, including my 401k that I cashed out to keep the party going. I experienced three bouts of pancreatitis, was stabbed in the chest and basically went blind for a month or so as a result of the pancreatitis. I would try to stop drinking and attend AA meetings, but by this time I could not stop. I would go through severe withdrawals, I hated myself, and soon the money ran out. My parents came and moved me to Missouri in hopes of getting me sober, but I only got worse and eventually found myself involved with the criminal justice system. Eventually, when my parents were ready to put me out on the street, I agreed to go to a long-term, faith-based program. I finally got a reprieve, but had a few relapses along the way. I ended up working there and then started working at another faith-based prison reentry program where I worked for 9 years. While there, I became involved with other groups around the state and started doing some legislative work in Jefferson City. We were successful in getting a line item in the state budget for recovery support services and soon, the board of directors of MCRSP asked me to be the Executive Director of MCRSP. Today, I am blessed to help accredit recovery homes across Missouri and work on legislation that impacts people in recovery, including funding issues for the recovery community. It is my goal to help as many people as possible to achieve recovery through whatever path works best for them. God is good!